Matthew Tobin is a sophomore student in Blauvelt, New York who recently completed the YMCA's Safe Routes to School Student Ambassador Program. Matthew's project focused on improving the walking paths around his high school and starting a local chapter for Safe Routes to School. He wrote this blog post sharing his reflections about the experience. 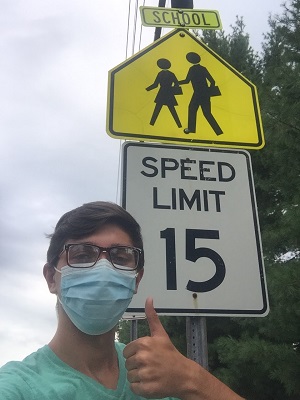 Walking to school never used to be a big deal for me. I lived close enough to my school that it was just a convenience. I was involved with the New York State YMCA Youth and Government, and that is where I first heard about the YMCA’s Safe Routes To School Student Ambassador Program in 2019, also run by the Alliance of New York State YMCAs. The program seemed like a great opportunity to make a positive change to the community beyond ordinary community service.

As a part of the program, I learned the mission of Safe Routes To School, to enable and encourage all children to walk and bike to school and to make walking and biking to school safe and appealing. I conducted my first walk audit, a report of the quality of pedestrian paths in an area. The walk audit documented the area around the local middle school. The results were presented to the middle school principal and the district director of pupil personnel services and plans were made for further action that the school could take.

In its second year, the SRTS Student Ambassador Program was greatly expanded to include more Student Ambassadors from throughout New York State, and I was even more excited to be accepted into the program again. The program taught more about what makes a community “walkable” and what makes a complete street. There was even going to be a summit in Albany where the Student Ambassadors would learn how to conduct a proper community walk audit as a group, and then bring back what we learned to conduct a walk audit in our home towns. I was excited to run an event that would help to improve the community. The program was running according to the original plan until the COVID-19 pandemic struck. This curveball meant a change of plans. The walk audit and the presentation to community leaders could no longer be held in person. Quarantine also meant that there could not be a summit in Albany. However, these changes did not mean that the program would be diminished. As it turned out, the pandemic proved to be an opportunity to overcome these challenges and rise higher than before.

Even though a physical summit could not be held in Albany, the YMCA staff adapted their plans, and instead hosted a virtual summit. This consisted of three separate meetings, with multiple keynote speakers, including state legislators, a local transportation department executive, police officer, community advocate, and local officials. These summits provided a chance to interact with leaders who were implementing real-world solutions to ultimately achieve Safe Routes to School. The speakers talked about the challenges and triumphs that they encountered when working for change in a community.

I still conducted my virtual community walk audit in person by myself, but I also took pictures of the route, which went around the local high school in Orangeburg, NY. These pictures were used to make a Google Form, which was then shared publicly. The virtual walk audit received responses from students, teachers, and other school officials which provided input about the locations where they would like to see changes made. In addition, I met via Zoom with my town supervisor and with my school’s assistant superintendent. The virtual walk audit was able to gather more feedback during quarantine than it had the year before out of quarantine.

Community feedback included large-scale projects, such as extending the curbs by crosswalks and adding lamp posts, along with easier tasks, like repainting the crosswalks. To determine what could be done to resolve these concerns, there was a meeting with the town supervisor, the police captain, and the assistant highway superintendent. The town supervisor agreed to consider a list of changes at specific locations, which was provided thanks to the responses from the virtual walk audit. The town supervisor would then give feedback about how the town can handle the larger projects and how Safe Routes To School can help with the less intensive duties.

The meeting with the assistant superintendent led me to being appointed to my school district’s Reopening Task Force. I was able to voice concerns that students may have with going back to school in person and also provide specific feedback relating to student transportation. This connection to the school allowed for the opportunity to launch a chapter of Safe Routes To School for the school district. The school helped determine what the chapter would look like and how to establish it. The main mission for Safe Routes to School with the school district is to encourage children to walk and bike to school. During the pandemic, walking has become a more feasible option for preserving social distancing than riding the bus.

Working with both the town and the school district, it sometimes feels like the efforts for Safe Routes to School are more bureaucratic and less active than they used to be. However, important officials for the community are now working with Safe Routes to School and large decisions necessitate a plan. Although the actions may be more procedural, this is just the start of the local Safe Routes to School Chapter. For now, I am continuing to write emails and host meetings, but the desired changes will come as long as the work continues.