One year after this demonstration project, the City of Little Rock received funding to install permanent walking and biking lanes at that site. The project was awarded roughly $1 million in Transportation Alternatives funding from Metroplan, the area metropolitan planning organization, and the City of Little Rock provided a 20 percent match. When the Little Rock team shared the good news, they said that the coalition-building they did during the Safe Routes to Parks grant and the resulting action plan made it easy for the director of public works to say “yes” to the permanent project and support their funding application. They had also used leftover funding from the Safe Routes to Parks grant to get renderings of what a permeant lane could look like on the highway bridge. They were able to present these renderings along with data from the temporary installation to strengthen the funding application.

This story is a great example of how implementing short-term, lower-cost projects can build momentum and support for larger, more expensive projects. Starting small now can set you up for success in future work.

War Memorial Park is a beautiful park in Little Rock, Arkansas, located near multiple public amenities like the Children’s Library and Learning Center, Little Rock Zoo, and a public splash pad. With support from a Safe Routes to Parks Activating Communities grant and technical assistance from the Safe Routes Partnership, the Central Arkansas Library System (CALS) and Little Rock Parks and Recreation partnered to overcome racial and physical division to reconnect the Children’s Library neighborhood, a primarily Black neighborhood, with War Memorial Park.

In the 1960s, Interstate-630 was built along Little Rock’s African-American business district, destroying homes of low-income, mostly Black residents, in the process. Residents of the city are still divided by I-630 today along race and class lines. Poor and Black residents primarily live on the south side of I-630 while white and affluent residents live north of I-630 and west of I-430. When it comes to accessing public space, segregation is a huge injustice Little Rock residents face.

CALS and Little Rock Parks and Recreation began their Safe Routes to Parks work by surveying over 170 community members to get an initial understanding of who used the War Memorial Park as well as barriers to accessing it. Additionally, community members completed a virtual walk audit of the area, and monthly meetings for interested stakeholders were held on Zoom due to the global coronavirus pandemic.  Kay Kay DeRossette from CALS coordinated the project and said, “Having input from citizens living in different neighborhoods brought a variety of perspectives to this work.  This group of neighbors helped identify barriers that prevent park access and implement solutions to address those barriers.”

Based on what they learned in the initial assessment phase, the coalition agreed their first project should focus on connecting the park with the Children’s Library neighborhood south of I-630 to physically bridge the racial divide of the interstate and provide a safe walking and biking route to the park.  They installed a temporary, month-long road diet on Jonesboro Drive, which goes over the highway, to increase the visibility of efforts to connect people to the park. Little Rock Parks and Recreation took the idea to the department of public works, which is typically responsible for on-street improvements. To determine if the project was feasible, the city conducted a traffic study of the area and surveyed the land. 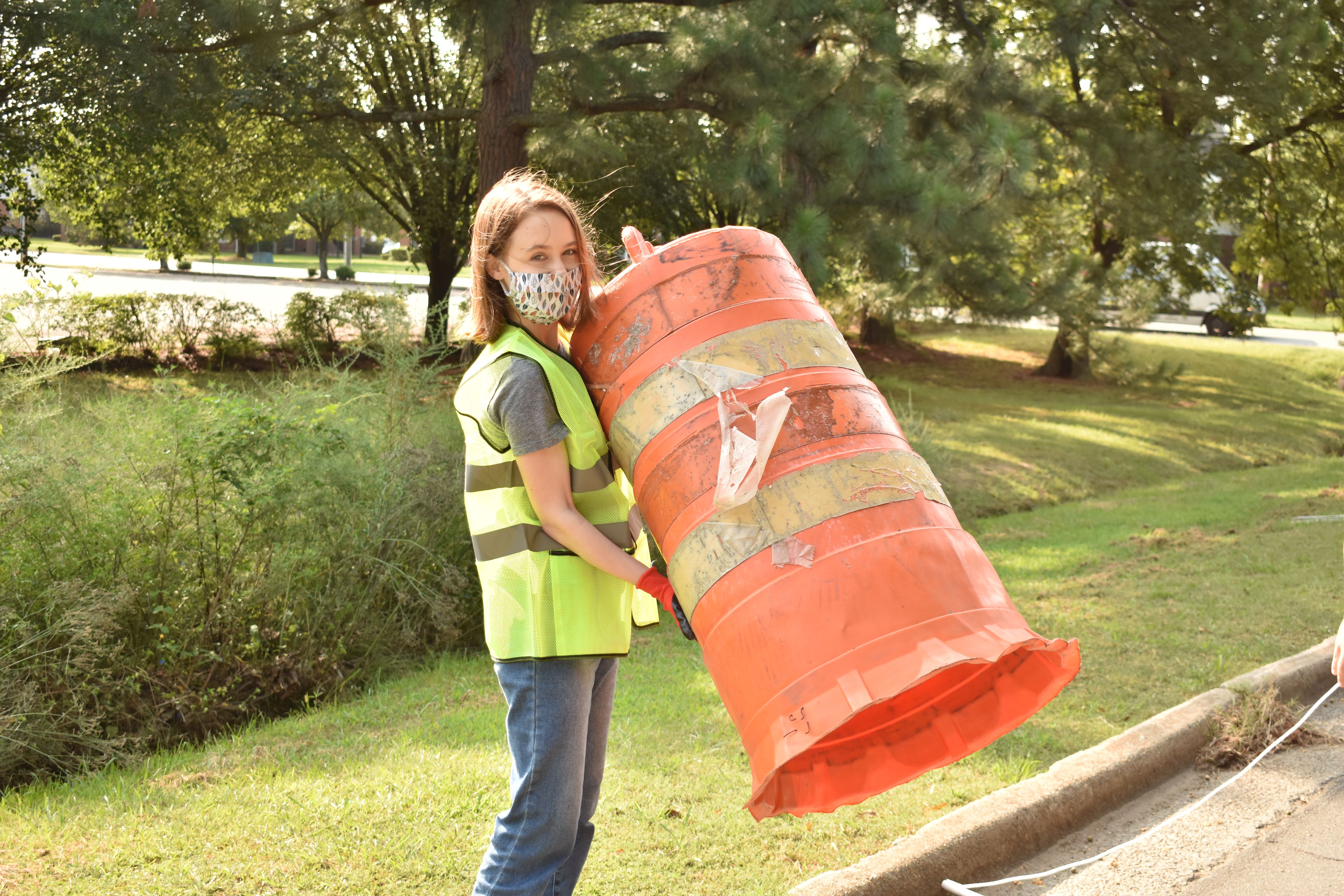 With approval from the city, the parks and recreation department moved ahead with plans for the road diet, relying on community partnerships by securing cones and barrels from the Little Rock Marathon. CALS created a Facebook event promoting the temporary lane, posted the event on their website, and bought safety vests for volunteers to use when setting up the temporary pedestrian and bike lanes. Zoo, library, and park staff maintained the installation, and Pulaski County added its bike counters to track participation throughout the month. Kay Kay DeRossette shared that, “Over 1,000 trips were taken during the road diet. Jonesboro Drive is a natural pathway that people use regardless of having the extra lane. By tracking the usage throughout the road diet, we not only provided a safer route but hope to use that information to create a more permanent solution along that path.” The event garnered media attention when the Arkansas Democrat-Gazette featured the project on the front page of the Sunday paper. These combined community efforts raised awareness about the event and encouraged residents to get out and use the route during the project. Another benefit of the project was that it aligned with the City of Little Rock’s phase three plan for the new greenway, an off-street bicycle and pedestrian corridor in the heart of the city, as well as the Master Streets plan that includes the city’s Master Bike Plan.

The momentum built through this project laid the foundation for a more permanent change to take place in the future.  One next step is for the coalition to connect the Mayor’s mobility agenda to the 10-Minute Walk, an initiative to ensure that everyone has safe access to a high-quality park within a 10-minute walk from home. By gathering data on the demonstration project and asking for the community’s input on other projects, the City of Little Rock will be able to apply this approach to other parks in the community. 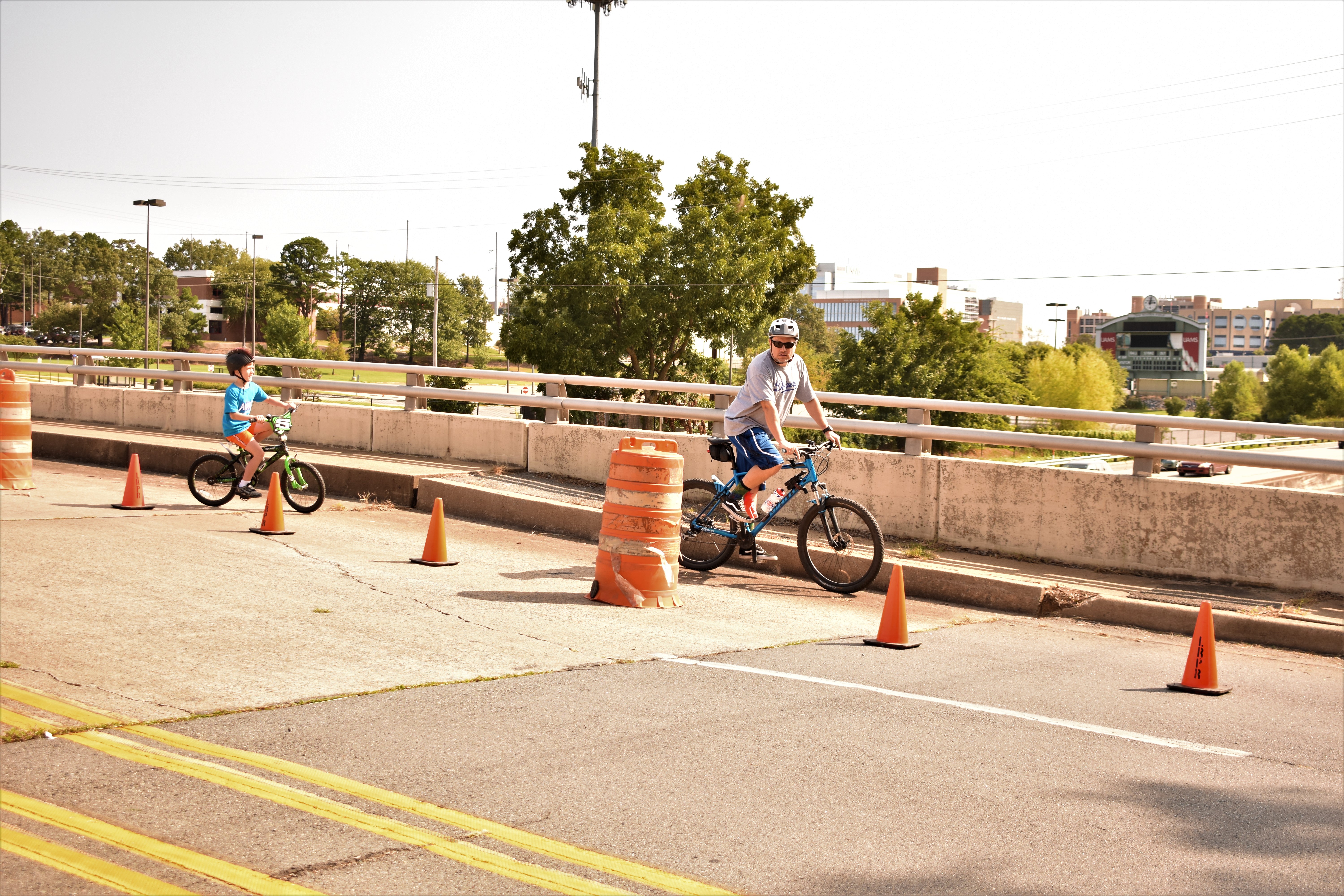 There is no doubt that the temporary road diet improved park access for residents living south of I-630. As Kathryn Jones, the assistant manager of Children’s Library and Learning Center said, “Many patrons walk to our library, and I personally believe many more would if they had a permanent, safe way to do so. The safe route has temporarily removed a barrier to the many resources available at the Children's Library.”