It Doesn't Take as Long as You'd Think!

This blog post was written by research advisor Tiffany Lam.

In a previous blog post we’ve addressed the question of “how far is “too far” to walk?” to school and how that raises another relevant question: “How can we make walking to school seem like a doable, enjoyable, safe, and everyday thing to do?” A related question that people often ask that we haven’t yet addressed is: “How long is ‘too long’ to walk or bike?” Or, “what is the acceptable travel time for people to commute by walking or bicycling?” Despite the overwhelming evidence that active commuting—walking and bicycling—is beneficial for one’s health and the environment, less than three percent of the American workforce commutes by foot or bike on a regular basis! According to a recent study from Penn State, most people say they don’t walk or bike to work because they don’t have time and that it would just take too long. 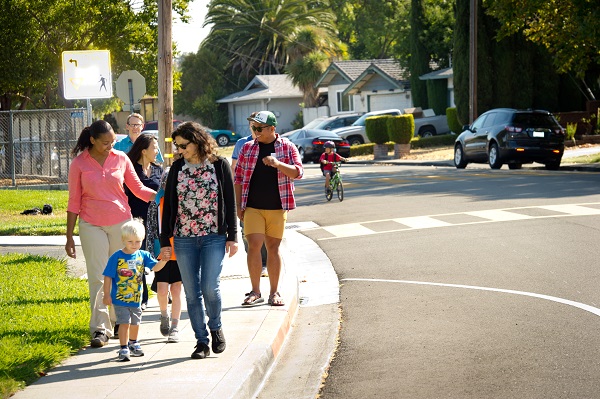 The study also debunks that claim! Researchers looked at discrepancies between how long people thought it would take to walk or bike their commute and the actual time it took. They surveyed 505 Penn State faculty, staff, and students about their fitness levels, commuting distance and patterns, and factors that influenced whether or not they walked or biked (such as time, traffic, how bike- or walk- friendly they perceived the campus, and the neighborhood where they lived). Most respondents drove between their homes and the university campus and the few who walked or biked tended to be students. As it turned out, everyone who did not have an active commute inaccurately perceived how long it would actually take to walk or bike from campus to home, or vice versa. In fact, 90 percent of the time, they overestimated active commuting times by at least ten minutes!

Interestingly enough, the two groups most likely to overestimate active commuting times were people who had parking permits and people—especially women—who didn’t consider themselves physically fit or didn’t have a lot of bicycling experience. Parking permits are highly sought after, so those who have them get in the habit of driving more. Knowing that you have a secured parking spot makes driving seem easier and more obvious. Meanwhile, people who felt they weren’t fit or experienced enough to commute by bike perceive more barriers to bicycling. Feeling unfit or inexperienced makes bicycling seem less relevant as an everyday mode of transportation.

There are two crucial takeaways from this finding: First, in order to get more people walking and bicycling to work or school, driving needs to be a less attractive option. Parking permits help make driving seem like a more attractive option, so the researchers suggest that university transportation policies need to consider parking cost and availability, as well as the location and availability of active and public transport options, in order to encourage more active commuting. Meanwhile, in cities, local governments could charge for on-street parking to make driving seem like a more troublesome, inconvenient option. Still, for walking or bicycling to be the obvious, more attractive, and doable choice, the built environment must be supportive of active travel. This means that there must be safe, quality sidewalks and bicycle lanes to enable people to walk or bike.

Quality infrastructure in the built environment is necessary but not sufficient. Bicycling education and encouragement programs are important to build people’s confidence in their bicycling abilities. Encouragement programs, especially, could play a role in making bike commuting seem more accessible, and not something that only fit people or super experienced bicyclists can do. Peer-to-peer networks can help create a sense of community and provide encouragement and support, which can get more women cycling. Investing in social infrastructure—such as cycling education and group rides, along with physical infrastructure—including sidewalks, bike lanes, and bike racks, will help create safer and supportive environments for all sorts of people to feel like walking and bicycling are viable ways to commute.

So, let’s return to the original question: How long is too long to walk or bike? Again, it doesn’t take as long as one might think! Certainly, some distances are too far and it is unreasonable to expect people to walk or bike for an hour or more to get to work or school. That is too long. However, most people are limited by their own misperceptions of how long it would take. People tend to overestimate how long walking or bicycling would take because driving just seems like the easier, faster, more obvious option. Or, they don’t feel like they can commute by bike because they lack confidence or experience, and have built up this idea that bicycling is something only fit people can do. If we can change those perceptions, then we can help more people see how doable walking and bicycling really are. After all, it really doesn’t take that long!