I recently had the privilege of speaking at the Fairfax County Bike Summit. It was the first Bike Summit in the county. Fairfax County has come a long way through the work of the Fairfax Advocates for Better Bicycling. It is the most congested county in the Greater Washington, DC region and the school system has one of the largest bus fleets. The advocates have a great relationship with the DOT and are pushing the ball forward.

A first time presentation request for me was that only pictures and no words could be on the slides! The focus was on telling a story. While this required a total rework of my usual pitch, as a way to communicate to the audience, I think it worked much better than my traditional hit ‘em with statistics format.

I presented with a local bike dad, Jeff, who started a bike train with his kids at their elementary school. His oldest daughter, Carina, was recently profiled on 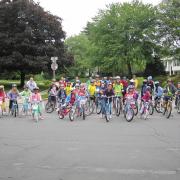 the Nickelodeon Worldwide Day of Play. We started our presentation with the video that was played on the Worldwide Day of Play. In this video, Carina does most of the talking. She is really our most powerful spokesperson. As a student, she is telling the world that bicycling to school is fun, it helps her get focused for her day and that she feels she is part of a movement. Pretty impressive.

We could have walked off the stage after the video played, it is that powerful. But instead, I jumped into my story of how a few parents in neighboring elementary schools are changing the culture and shifting the mode of transportation to school in Fairfax County. As slide after slide of pictures were shown, I did my get statistics in peppered throughout the story. But once again, it was the kids who stole the show-they were all smiling, in the rain and in the sun, on bikes, holding their parents hands while walking, bike racks full and a group picture with so many students they stretched across the school entrance.

There are no better spokespersons for our work and I think I just found my new way of presenting.