The Wheels on the Bus: Gathering the Evidence for Walking School Buses

This blog post was written by our research advisor, Christina Galardi.

As Safe Routes to School practitioners, schools, parents, and community partners work together to make it easier and safer for kids to walk to school, it is important to understand barriers to participation and how we can effectively address them. In this research beat, we’ve gathered the academic literature on Walking School Buses to share evidence and key takeaways. 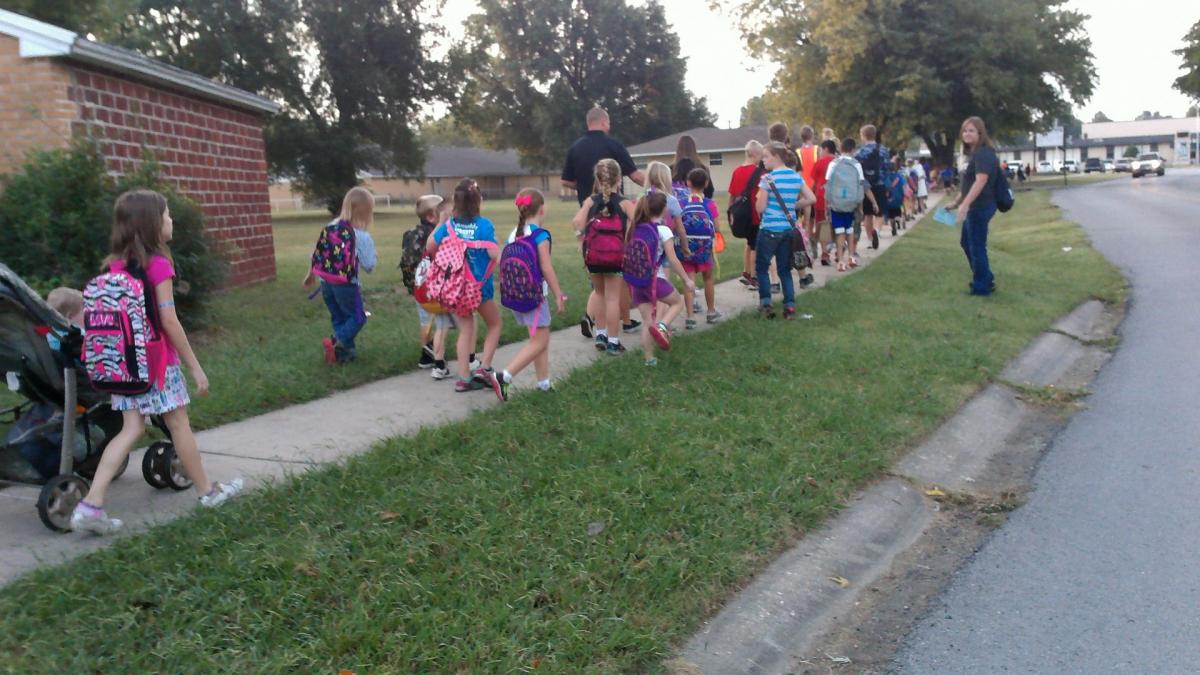 Walking School Buses (WSBs) are an organized group of children walking to and from school with adult supervision, similar to a carpool system but on foot. WSBs can be started informally by groups of parents taking turns walking, but these programs can also be supported through schools as a formal program with a set route, timetable of meeting places as “bus stops”, and adult chaperone volunteer schedule (Smith et al., 2015; Yang et al., 2014).

Distance is the factor most influencing parents’ decision to allow their children to walk or bike to school. Apart from distance, parents commonly identify safety concerns like speed and amount of traffic as a leading factor influencing the decision to allow children to walk or bike to school (Zhou et al., 2009). In a study conducted in the San Francisco Bay Area by McDonald and Aalborg (2009), 46 percent of 403 parents surveyed who drove their children less than two miles did not allow their child to walk to school without adult supervision. However, walking with a child to school requires parents and guardians to dedicate additional time to school travel, which can be difficult to coordinate with work schedules. In the same study, 75 percent of parents reported convenience and saving time as reasons for driving children short distances to school. In another study by Zhou and colleagues in 14 Florida elementary and middle schools (2009), 17.5 percent of parents surveyed said that the presence of an adult cowalker could change their decision to allow a child participate in active transportation, after considerations like distance, weather, and intersection safety. One strategy for addressing safety and time constraints is the Walking School Bus (WSB). Although street improvements are important for addressing traffic danger, WSBs are encouragement programs that can complement these physical changes and ease concerns for parents that require adult supervision for children to walk to school (McDonald and Allborg, 2009).

What does the research have to say about the impact of Walking School Buses?

Several studies have evaluated WSBs on active transportation and health outcomes. Here are highlights from a few:

How can we maximize the benefits of Walking School Buses?

The wheels on the bus are turning; the WSB movement is growing. Nationally, the percentage of schools with WSB programs increased from 4.2 percent in 2008-2009 to 6.2 percent in 2009-2010. However, differences in participation across geographic and school characteristics highlight areas for expanded efforts. For example, WSB programs were more common in the Northeast (10.9% of schools) and West (7.9%) than in the South (2.9%). Rural schools were 73 percent less likely to implement a WSB program than urban schools, and schools with a majority Latino population were 78 percent less likely to have a WSB than schools with a majority white population (Turner, Chriqui, and Chaloupka, 2013).

An effective WSB program takes good coordination. Recruitment of volunteers able to make the time commitment can be a challenge, and providing information and promoting programs effectively are key facilitators of WSBs. Yang and colleagues (2015) found that participation in active school travel increased from 7.6 percent to 15.1 percent by implementing a WSB alone, but when combined with an educational campaign promoting active transportation, active commuting increased to 23.1 percent. Schools and WSB champions should also take into consideration ways to encourage continued volunteer and child participation, make accommodations for family schedules, and address reduced motivation in winter months (Smith et al., 2015).

Furthermore, state and district-level support for WSBs and other active transportation programs can reinforce their importance. A study by Turner, Chriqui and Chaloupka (2013) found that elementary schools were more than twice as likely to have a WSB if district and state policies supported safe active transportation than if no such policies were in place.

WSBs are an important educational opportunity. Chaperones should encourage children’s pedestrian safety behaviors by emphasizing crossing at intersections and fully stopping at the curb (Mendoza et al., 2012). Additionally, the walk to school could offer potential for conversations about other health topics. In a small pilot study in one school, premedical students served as WSB coordinators, using the walk to emphasize key themes to “get up and play,” “turn off your television,” “eat five servings of fruit/vegetables per day,” and “reduce soda/juice intake.” Participants reported increased physical activity and fruit and vegetable intake after 10 weeks (Kong et al., 2010).

WSBs are a promising strategy for supporting active transportation and increased physical activity, and they can save time for parents and be fun for children and volunteers, too! For tips and strategies for planning a WSB program, check out The Walking School Bus Primer published by the National Center for Safe Routes to School.